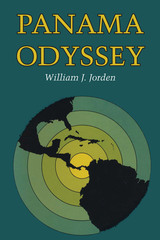 BUY
Panama Odyssey
by William J. Jorden
University of Texas Press, 1984
eISBN: 978-0-292-71817-3
Paper: 978-0-292-71801-2
The Panama Canal Treaties of 1977 were the most significant foreign policy achievement of the Carter administration. Most Latin American nations had regarded the 1903 treaty and its later minor modifications as vestiges of "American colonialism" and obstacles to any long-term, stable relationship with the United States. Hence, at a time when conflicts were mushrooming in Central America, the significance of the new Panama treaties cannot be overestimated. Former Ambassador to Panama William J. Jorden has provided the definitive account of the long and often contentious negotiations that produced those treaties. It is a vividly written reconstruction of the complicated process that began in 1964 and ended with ratification of the new pacts in 1978. Based on his personal involvement behind the scenes in the White House (1972–1974) and in the United States Embassy in Panama (1974–1978), Jorden has produced a unique living history. Access to documents and the personalities of both governments and, equally important, Jorden's personal recollections of participants on both sides make this historical study an incomparable document of U. S. foreign relations. Beyond the singular story of the treaties themselves—and how diplomats negotiate in the modern world—is the rare description of how the United States deals with a major foreign policy problem. How does a superpower cope with a tiny nation that happens to occupy a strategically critical position? And how does the U. S. Senate face up to its constitutionally assigned power to "advise and consent"? Once treaties are approved, does the House of Representatives help or hinder? Panama Odyssey also deals with another crucial element in the shaping of policy—public opinion: how is it informed or led astray? In sum, this is a history, a handbook on diplomacy, a course in government, and a revelation of foreign policy in action, all based on a fascinating and controversial episode in the U. S. experience.
AUTHOR BIOGRAPHY
William J. Jorden (1923–2009), former United States ambassador to Panama, was a member of the National Security Council Staff under Presidents Johnson and Nixon. He also was a member of the U. S. delegation to the Vietnam peace talks in Paris. Before his
TABLE OF CONTENTS


PrefaceAcknowledgments1. When Presidents Negotiate2. Prelude to Crisis3. Blood in the Streets4. Breaking the Deadlock5. The Orphan Treaties6. Coup and Countercoup7. Ships That Pass8. On the World Stage9. The Kissinger Principles10. New Envoy to the Isthmus11. Treaty Making on a Tropic Isle12. Struggle behind the Scenes13. The Political Ingredient14. A Bitter Pill to Swallow15. Generous, Fair, and Appropriate16. Treaties at Last17. The Battle for Two-Thirds18. The Great Debate: Act One19. The Great Debate: Act Two20. “The President Is Coming”EpiloguePhotographs and MapsAppendixesA. Tact-Rogers Principles; Tact-Kissinger PrinciplesB. John Wayne’s Statement Regarding Panama Canal TreatiesC. Treaty Concerning the Permanent Neutrality and Operation of the Panama CanalD. Panama Canal TreatyA Note on SourcesSourcesIndex