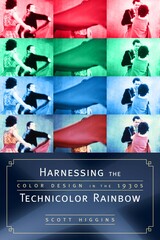 Like Dorothy waking up over the rainbow in the Land of Oz, Hollywood discovered a vivid new world of color in the 1930s. The introduction of three-color Technicolor technology in 1932 gave filmmakers a powerful tool with which to guide viewers’ attention, punctuate turning points, and express emotional subtext. Although many producers and filmmakers initially resisted the use of color, Technicolor designers, led by the legendary Natalie Kalmus, developed an aesthetic that complemented the classical Hollywood filmmaking style while still offering innovative novelty. By the end of the 1930s, color in film was thoroughly harnessed to narrative, and it became elegantly expressive without threatening the coherence of the film’s imaginary world. Harnessing the Technicolor Rainbow is the first scholarly history of Technicolor aesthetics and technology, as well as a thoroughgoing analysis of how color works in film. Scott Higgins draws on extensive primary research and close analysis of well-known movies, including Becky Sharp, A Star Is Born, Adventures of Robin Hood, and Gone with the Wind, to show how the Technicolor films of the 1930s forged enduring conventions for handling color in popular cinema. He argues that filmmakers and designers rapidly worked through a series of stylistic modes based on the demonstration, restraint, and integration of color—and shows how the color conventions developed in the 1930s have continued to influence filmmaking to the present day. Higgins also formulates a new vocabulary and a method of analysis for capturing the often-elusive functions and effects of color that, in turn, open new avenues for the study of film form and lay a foundation for new work on color in cinema.
AUTHOR BIOGRAPHY
SCOTT HIGGINS is Associate Professor of Film Studies at Wesleyan University in Middletown, Connecticut.
TABLE OF CONTENTS


Acknowledgments1. Introduction: The Challenge of Technicolor2. Forging a New Aesthetic: From Opera to Color Consciousness3. A Feature-Length Demonstration: Becky Sharp4. Unobtrusive Design: Introducing Three-Color to Conventional Production5. Delicate Expansions: Designing in the Restrained Mode6. Broadening the Palette: The Adventures of Robin Hood7. A Fully Integrated Design: Light and Color in Gone with the Wind8. Beyond the 1930s: The Legacies of Three-Color AestheticsAppendix 1: Types of Prints Consulted and Variables in Color ReproductionAppendix 2: Chronological Filmography: Three-Color Features of the 1930sAppendix 3: Pantone Numbers for Color NamesNotesWorks CitedIndex