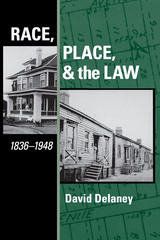 Black and white Americans have occupied separate spaces since the days of "the big house" and "the quarters." But the segregation and racialization of American society was not a natural phenomenon that "just happened." The decisions, enacted into laws, that kept the races apart and restricted blacks to less desirable places sprang from legal reasoning which argued that segregated spaces were right, reasonable, and preferable to other arrangements.

In this book, David Delaney explores the historical intersections of race, place, and the law. Drawing on court cases spanning more than a century, he examines the moves and countermoves of attorneys and judges who participated in the geopolitics of slavery and emancipation; in the development of Jim Crow segregation, which effectively created apartheid laws in many cities; and in debates over the "doctrine of changed conditions," which challenged the legality of restrictive covenants and private contracts designed to exclude people of color from white neighborhoods. This historical investigation yields new insights into the patterns of segregation that persist in American society today.