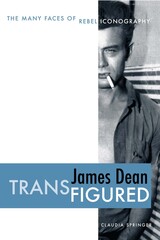 After the death of James Dean in 1955, the figure of the teen rebel permeated the globe, and its presence is still felt in the twenty-first century. Rebel iconography—which does not have to resemble James Dean himself, but merely incorporates his disaffected attitude—has become an advertising mainstay used to sell an array of merchandise and messages. Despite being overused in advertisements, it still has the power to surprise when used by authors and filmmakers in innovative and provocative ways. The rebel figure has mass appeal precisely because of its ambiguities; it can mean anything to anyone. The global appropriation of rebel iconography has invested it with fresh meanings. Author Claudia Springer succeeds here in analyzing both ends of the spectrum—the rebel icon as a tool in upholding capitalism’s cycle of consumption, and as a challenge to that cycle and its accompanying beliefs. In this groundbreaking study of rebel iconography in international popular culture, Springer studies a variety of texts from the United States and abroad that use this imagery in contrasting and thought-provoking ways. Using a cultural studies approach, she analyzes films, fiction, poems, Web sites, and advertisements to determine the extent to which the icon’s adaptations have been effective as a response to the actual social problems affecting contemporary adolescents around the world.
AUTHOR BIOGRAPHY
CLAUDIA SPRINGER is an independent scholar living in Newton, Massachusetts. She was a professor in the English Department and Film Studies Program at Rhode Island College for many years.
TABLE OF CONTENTS