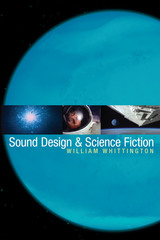 Sound is half the picture, and since the 1960s, film sound not only has rivaled the innovative imagery of contemporary Hollywood cinema, but in some ways has surpassed it in status and privilege because of the emergence of sound design.

This in-depth study by William Whittington considers the evolution of sound design not only through cultural and technological developments during the last four decades, but also through the attitudes and expectations of filmgoers. Fans of recent blockbuster films, in particular science fiction films, have come to expect a more advanced and refined degree of film sound use, which has changed the way they experience and understand spectacle and storytelling in contemporary cinema.

The book covers recent science fiction cinema in rich and compelling detail, providing a new sounding of familiar films, while offering insights into the constructed nature of cinematic sound design. This is accomplished by examining the formal elements and historical context of sound production in movies to better appreciate how a film sound track is conceived and presented.Whittington focuses on seminal science fiction films that have made specific advances in film sound, including 2001: A Space Odyssey, THX 1138, Star Wars, Alien, Blade Runner (original version and director's cut), Terminator 2: Judgment Day and The Matrix trilogy and games—milestones of the entertainment industry's technological and aesthetic advancements with sound.

Setting itself apart from other works, the book illustrates through accessible detail and compelling examples how swiftly such advancements in film sound aesthetics and technology have influenced recent science fiction cinema, and examines how these changes correlate to the history, theory, and practice of contemporary Hollywood filmmaking.

William Whittington is Assistant Chair of Critical Studies at the University of Southern California in Los Angeles.