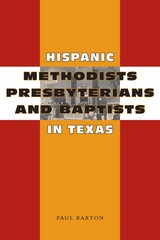 This book presents the first comparative history of Hispanic Methodists, Presbyterians, and Baptists in Texas. Covering a broad sweep from the 1830s to the 1990s, Paul Barton examines how Mexican-American Protestant identities have formed and evolved as los Protestantes interacted with their two very different communities in the barrio and in the Protestant church. He looks at historical trends and events that affected Mexican-American Protestant identity at different periods and discusses why and how shifts in los Protestantes' sense of identity occurred. His research highlights the fact that while Protestantism has traditionally served to assimilate Mexican Americans into the dominant U.S. society, it has also been transformed into a vehicle for expressing and transmitting Hispanic culture and heritage by its Mexican-American adherents.

Paul Barton is Associate Professor of Hispanic Church Studies at the Episcopal Theological Seminary of the Southwest in Austin, Texas.

Dr. Barton's book will provide an arena for significant dialogue among scholars, as well as between Catholics and Protestants, on the nature and significance of Hispanic Protestantism in the United States.... There is no question that this book is a significant contribution to the field. Indeed, there is no other book like it.