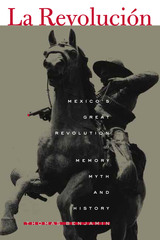 The 1910 Revolution is still tangibly present in Mexico in the festivals that celebrate its victories, on the monuments to its heroes, and, most important, in the stories and memories of the Mexican people. Yet there has never been general agreement on what the revolution meant, what its objectives were, and whether they have been accomplished.

This pathfinding book shows how Mexicans from 1910 through the 1950s interpreted the revolution, tried to make sense of it, and, through collective memory, myth-making, and history writing, invented an idea called "la Revolución." In part one, Thomas Benjamin follows the historical development of different and often opposing revolutionary traditions and the state's efforts to forge them into one unified and unifying narrative. In part two, he examines ways of remembering the past and making it relevant to the present through fiestas, monuments, and official history. This research clarifies how the revolution has served to authorize and legitimize political factions and particular regimes to the present day. Beyond the Mexican case, it demonstrates how history is used to serve the needs of the present.

AUTHOR BIOGRAPHY
Thomas Benjamin is Professor of Latin American History at Central Michigan University.
REVIEWS
There is no hotter topic than how we construct our historical memory. The Mexican Revolution offers an exemplary myth to explore. Thomas Benjamin has examined the construction of the Mexican memory and the myth of the Revolution with wit and grace.... I believe this book will find a considerable market among students and scholars.
— Mark Wasserman