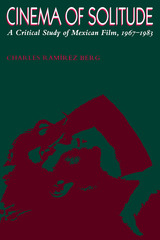 La crisis, a period of political and economic turmoil in Mexico that began in the late 1960s, spawned a new era in Mexican cinema. Known as el Nuevo Cine (the New Cinema), these films presented alienated characters caught in a painful transition period in which old family, gender, and social roles have ceased to function without being replaced by viable new ones. These are the films explored by Charles Ramírez Berg in Cinema of Solitude, the first book-length critical study of Mexican cinema in English.

Berg discusses the major films and filmmakers of el Nuevo Cine in depth. He analyzes dozens of commercial movies, from popular comedies and adventures to award-winning films. Introductory chapters address the issue of mexicanidad (Mexican national identity) and outline Mexican history, the history of film as popular culture and as a leading national industry, and the ideological dynamics of Mexican cinema.

In thematically arranged chapters, Berg investigates the images of women, men, and social structures portrayed in New Cinema films. He finds that women characters have begun to reject traditional stereotypes for more positive images, while male characters have grown ambiguous and undefined as machismo is abandoned. Other chapters trace the continuing marginalization of Indians in Mexican culture, the changes in male dominance within the family, and the disruptive social and economic effects caused by migration.

For everyone interested in Mexican culture as reflected in its major cinematic productions, as well as students of film theory and national cinemas, this book will be important reading.

AUTHOR BIOGRAPHY
Charles Ramírez Berg is Distinguished Teaching Professor of Radio-Television-Film at The University of Texas at Austin.
TABLE OF CONTENTS