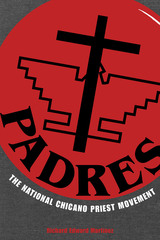 From the 1848 Treaty of Guadalupe Hidalgo to the 1960s, Mexican American Catholics experienced racism and discrimination within the U.S. Catholic church, as white priests and bishops maintained a racial divide in all areas of the church's ministry. To oppose this religious apartheid and challenge the church to minister fairly to all of its faithful, a group of Chicano priests formed PADRES (Padres Asociados para Derechos Religiosos, Educativos y Sociales, or Priests Associated for Religious, Educational, and Social Rights) in 1969. Over the next twenty years of its existence, PADRES became a powerful force for change within the Catholic church and for social justice within American society.

This book offers the first history of the founding, activism, victories, and defeats of PADRES. At the heart of the book are oral history interviews with the founders of PADRES, who describe how their ministries in poor Mexican American parishes, as well as their own experiences of racism and discrimination within and outside the church, galvanized them into starting and sustaining the movement. Richard Martínez traces the ways in which PADRES was inspired by the Chicano movement and other civil rights struggles of the 1960s and also probes its linkages with liberation theology in Latin America. He uses a combination of social movement theory and organizational theory to explain why the group emerged, flourished, and eventually disbanded in 1989.

AUTHOR BIOGRAPHY
Richard Edward Martínez is an assistant professor in the Department of Chicano Studies at the University of Minnesota. He holds a Ph.D. in urban planning from UCLA.
REVIEWS
This is a powerful documentary of a movement whose greatest visibility was in the barrios and inside the church, where the least history is known, where much uncovering has to be accomplished in order for the Chicano community to begin to know its own Catholic history.
— Rodolfo Rosales