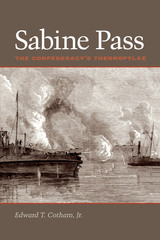 In an 1882 speech, former Confederate president Jefferson Davis made an exuberant claim: "That battle at Sabine Pass was more remarkable than the battle at Thermopylae." Indeed, Sabine Pass was the site of one of the most decisive Civil War battles fought in Texas. But unlike the Spartans, who succumbed to overwhelming Persian forces at Thermopylae more than two thousand years before, the Confederate underdogs triumphed in a battle that over time has become steeped in hyperbole. Providing a meticulously researched, scholarly account of this remarkable victory, Sabine Pass at last separates the legends from the evidence.

In arresting prose, Edward T. Cotham, Jr., recounts the momentous hours of September 8, 1863, during which a handful of Texans—almost all of Irish descent—under the leadership of Houston saloonkeeper Richard W. Dowling, prevented a Union military force of more than 5,000 men, 22 transport vessels, and 4 gunboats from occupying Sabine Pass, the starting place for a large invasion that would soon have given the Union control of Texas.

Sabine Pass sheds new light on previously overlooked details, such as the design and construction of the fort (Fort Griffin) that Dowling and his men defended, and includes the battle report prepared by Dowling himself. The result is a portrait of a mythic event that is even more provocative when stripped of embellishment.

Edward T. Cotham, Jr., is an independent scholar based in Houston, Texas. He has served as president of the Houston Civil War Roundtable and is the author of Battle on the Bay: The Civil War Struggle for Galveston.

REVIEWS
The book is beautifully written, profusely illustrated and meticulously researched -- and sure to instruct and entertain any reader of Civil War history.
— Civil War News