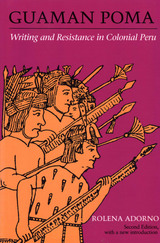 In the midst of native people's discontent following Spanish conquest, a native Andean born after the fall of the Incas took up the pen to protest Spanish rule. Felipe Guaman Poma de Ayala wrote his Nueva corónica y buen gobierno to inform Philip III of Spain about the evils of colonialism and the need for governmental and societal reform. By examining Guaman Poma's verbal and visual engagement with the institutions of Western art and culture, Rolena Adorno shows how he performed a comprehensive critique of the colonialist discourse of religion, political theory, and history. She argues that Guaman Poma's work chronicles the emergence of a uniquely Latin American voice, characterized by the articulation of literary art and politics. Following the initial appearance of Guaman Poma: Writing and Resistance in Colonial Peru, the 1990s witnessed the creation of a range of new studies that underscore the key role of the Nueva corónica y buen gobierno in facilitating our understanding of the Andean and Spanish colonial pasts. At the same time, the documentary record testifying to Guaman Poma's life and work has expanded dramatically, thanks to the publication of long-known but previously inaccessible drawings and documents. In a new, lengthy introduction to this second edition, Adorno shows how recent scholarship from a variety of disciplinary perspectives sheds new light on Guaman Poma and his work, and she offers an important new assessment of his biography in relation to the creation of the Nueva corónica y buen gobierno.
TABLE OF CONTENTS


AcknowledgmentsIntroduction to the Second Edition: Contextualizing the Nueva coronica y buen gobiernoGuaman Poma in the Documentary Record The Production and Facsimile Reproduction of the Autograph Manuscript Recent Advances in the Study of Guaman Poma's Visual and Verbal Art Guaman Poma in the 1590s The Expediente Prado Tello Guaman Poma in the Expediente Prado Tello Guaman Poma versus Don Domingo Jauli and the Chachapoyas The Conclusion of the Land-Title Litigation Guaman Poma in 1600: The Sentence of Exile from Huamanga Chupas and the Chachapoyas in the Nueva coronica y buen gobierno Mestizaje in the Nueva coronica y buen gobierno Guaman Poma's Biography Reconsidered Writing and Religion: The Visita Report An Anticipated Glimpse into the Artist's Studio Introduction History Writing and Polemic Challenging the Canon l. Contradicting the Chronicles of Conquest Guaman Poma's Exploitation of Written Histories Respect for History The Dominican Philosophy of ConquestThe Dramatization of a HypothesisThe Present Overwhelms the Past2. Searching for a Heroic ConceptionHistorical Truth and Moral VisionBiographies of Incas and KingsThe Prologue Always Comes LastThe Nueva Coronica as Epic Story3. From Story to SermonGranadine StrategiesOn Moving the Reader's AffectionsThe Literature of ConversionA Theory of Cross-Cultural CommunicationThe Privileged Role of InventionThe Simile of LuciferThe Voice and Character of the Preacher The Sermon Overtakes the Story 4. Icons in Space: The Silent Orator Baroque SensibilitiesVisual Representation and SuppressionThe Symbolic Values of Pictorial Space Lines of Authority and Hierarchy Disorder on the Horizontal Axis Paradigms Lost: The Reversed Diagonal and the Empty Center 5. Mediating among Many Worlds Allegory, Satire, and the Sermon Of Caciques and Coyas Inside the Coya's Chamber The Present in the Past The Author as Hero Guaman Poma's Final Critique Notes Bibliography Index