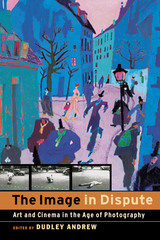 The Image in Dispute: Art and Cinema in the Age of Photography
edited by Dudley Andrew
contributions by Sally Shafto
University of Texas Press, 1997
Paper: 978-0-292-70476-3

Photography, cinema, and video have irrevocably changed the ways in which we view and interpret images. Indeed, the mechanical reproduction of images was a central preoccupation of twentieth-century philosopher Walter Benjamin, who recognized that film would become a vehicle not only for the entertainment of the masses but also for consumerism and even communism and fascism.

In this volume, experts in film studies and art history take up the debate, begun by Benjamin, about the power and scope of the image in a secular age. Part I aims to bring Benjamin's concerns to life in essays that evoke specific aspects and moments of the visual culture he would have known. Part II focuses on precise instances of friction within the traditional arts brought on by this century's changes in the value and mission of images. Part III goes straight to the image technologies themselves—photography, cinema, and video—to isolate distinctive features of the visual cultures they help constitute.

As we advance into the postmodern era, in which images play an ever more central role in conveying perceptions and information, this anthology provides a crucial context for understanding the apparently irreversible shift from words to images that characterized the modernist period. It will be important reading for everyone in cultural studies, film and media studies, and art history.