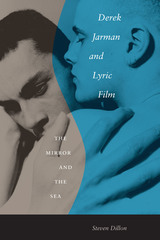 Derek Jarman and Lyric Film: The Mirror and the Sea
by Steven Dillon
University of Texas Press, 2004
Paper: 978-0-292-70224-0
Derek Jarman was the most important independent filmmaker in England during the 1980s. Using emblems and symbols in associative contexts, rather than conventional, cause-and-effect narrative, he created films noteworthy for their lyricism and poetic feeling and for their exploration of the gay experience. His style of filmmaking also links Jarman with other prominent directors of lyric film, including Pier Paolo Pasolini, Andrei Tarkovsky, Jean Cocteau, and Jean Genet. This pathfinding book places Derek Jarman in the tradition of lyric film and offers incisive readings of all eleven of his feature-length films, from Sebastiane to Blue. Steven Dillon looks at Jarman and other directors working in a similar vein to establish how lyric films are composed through the use of visual imagery and actual poetry. He then traces Jarman’s use of imagery (notably mirrors and the sea) in his films and discusses in detail the relationship between cinematic representations and sexual identity. This insightful reading of Jarman’s work helps us better understand how films such as The Last of England and The Garden can be said to cohere and mean without being reduced to clear messages. Above all, Dillon’s book reveals how truly beautiful and brilliant Jarman’s movies are.
AUTHOR BIOGRAPHY
Steven Dillon is Professor of English at Bates College in Lewiston, Maine.
TABLE OF CONTENTS


AcknowledgmentsChapter One: Derek Jarman and the History of Lyric FilmChapter Two: The Mirror and the Sea: Jarman's Poetry and Queer MirroringChapter Three: Poetry and Interpretation in Three Early Features: Sebastiane, Jubilee, and The TempestChapter Four: Poetry and the Dislocations of Sound in The Angelic Conversation and War RequiemChapter Five: Caravaggio and the Mirror of GoldChapter Six: Reading Pictures: Emblem and Gesture in The Last of England and The GardenChapter Seven: Into the Last, Narrow Rooms: Edward II, Wittgenstein, and BlueNotesBibliographyIndex