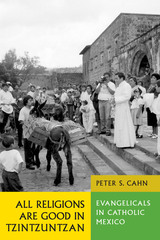 Since the 1960s, evangelical Christian denominations have made converts throughout much of Roman Catholic Latin America, causing clashes of faith that sometimes escalate to violence. Yet in one Mexican town, Tzintzuntzan, the appearance of new churches has provoked only harmony. Catholics and evangelicals alike profess that “all religions are good,” a sentiment not far removed from “here we are all equal,” which was commonly spoken in the community before evangelicals arrived. In this paradigm-challenging study, Peter Cahn investigates why the coming of evangelical churches to Tzintzuntzan has produced neither the interfaith clashes nor the economic prosperity that evangelical conversion has brought to other communities in Mexico and Latin America. Drawing on extensive ethnographic fieldwork, he demonstrates that the evangelicals’ energetic brand of faith has not erupted into violence because converts continue to participate in communal life, while Catholics, in turn, participate in evangelical practices. He also underscores how Tzintzuntzan’s integration into global economic networks strongly motivates the preservation of community identity and encourages this mutual borrowing. At the same time, however, Cahn concludes that the suppression of religious difference undermines the revolutionary potential of religion.
AUTHOR BIOGRAPHY
Peter S. Cahn is Assistant Professor of Anthropology at the University of Oklahoma.
TABLE OF CONTENTS


Preface. Confronting Interreligious Violence1. Sharing the Burden of Fiestas across Borders2. Drinking and the Divine in Chiapas and Tzintzuntzan3. Accounting for Missionaries and Money4. Responding to the Minority: Catholic Self-Improvement5. Responding to the Majority: Doctrinal Disobedience6. Considering the Consequences of ConversionConclusion: Mobilizing ReligionNotesBibliographyIndex