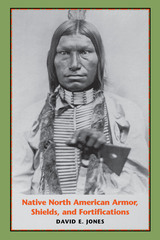 From the Chickasaw fighting the Choctaw in the Southeast to the Sioux battling the Cheyenne on the Great Plains, warfare was endemic among the North American Indians when Europeans first arrived on this continent. An impressive array of offensive weaponry and battle tactics gave rise to an equally impressive range of defensive technology. Native Americans constructed very effective armor and shields using wood, bone, and leather. Their fortifications ranged from simple refuges to walled and moated stockades to multiple stockades linked in strategic defensive networks.

In this book, David E. Jones offers the first systematic comparative study of the defensive armor and fortifications of aboriginal Native Americans. Drawing data from ethnohistorical accounts and archaeological evidence, he surveys the use of armor, shields, and fortifications both before European contact and during the historic period by American Indians from the Southeast to the Northwest Coast, from the Northeast Woodlands to the desert Southwest, and from the Sub-Arctic to the Great Plains. Jones also demonstrates the sociocultural factors that affected warfare and shaped the development of different types of armor and fortifications. Extensive eyewitness descriptions of warfare, armor, and fortifications, as well as photos and sketches of Indian armor from museum collections, add a visual dimension to the text.

AUTHOR BIOGRAPHY
David E. Jones is Professor of Anthropology at the University of Central Florida in Orlando.
REVIEWS
This book provides the first and only comprehensive survey of armor, shields, and fortifications [of American Indians]. . . . It has left me with a new appreciation for the sheer diversity of warfare, armor, and fortifications used by Native Americans, and it shatters stereotypes about the nature of aboriginal warfare.
— Wayne Van Horne

This succinct book is well written and systematically organized and it will serve as the starting point for any future studies on the subject.
— Military History of the West