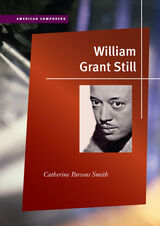 In this compact introduction to the life and work of eminent African American composer William Grant Still (1895-1978), Catherine Parsons Smith tracks the composer's interrelated careers in popular and concert music.

Still merged both musical traditions in his work, studying composition with George W. Chadwick at the New England Conservatory, collaborating with Langston Hughes on Troubled Island, and working as a commercial arranger and composer on Broadway and radio during the Harlem Renaissance. Still also played in the pit band for Shuffle Along, served as recording director for the first Black-owned record label, Black Swan, and arranged music for artists such as Sophie Tucker, Paul Whiteman, and Artie Shaw.

Best known for his Afro-American Symphony and other works that drew heavily on black American musical heritage, Still struggled against financial hardship and declining attention to his work, which he attributed to political and racist conspiracies. This "dean of Afro-American composers" created his own, unique version of musical modernism, influencing commercial music, symphonic music, and opera in the process.

AUTHOR BIOGRAPHY
Catherine Parsons Smith (1933-2009) was a professor emerita of music at the University of Nevada, Reno. She was the author of Making Music in Los Angeles: Transforming the Popular and William Grant Still: A Study in Contradiction.
REVIEWS
"This book will be the standard work on William Grant Still for at least twenty years. Smith provides a brilliant narrative of Still's active career, his cooperation with Carl Van Vechten, and his prestige as an American composer. A useful introduction to Still's life, career, music, and sociological importance."--Wayne D. Shirley, emeritus senior music specialist, Library of Congress


"A superb general reference to the life and career of William Grant Still. Smith does an excellent job of placing the composer within the context of African American life of his day. She is at her best in narrating Still's professional career in New York, Boston, and Los Angeles."--Josephine Wright, editor of New Perspectives on Music: Essays in Honor of Eileen Southern

"This exemplary introduction to African American musician William Grant Still will appeal to both students and laypersons. . . . Recommended."--Choice