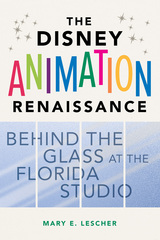 Walt Disney Feature Animation Florida opened in Orlando at the dawn of the Disney Renaissance. As a member of the crew, Mary E. Lescher witnessed the small studio’s rise and fall during a transformative era in company and movie history. Her in-depth interviews with fellow artists, administrators, and support personnel reveal the human dimension of a technological revolution: the dramatic shift from hand-drawn cel animation to the digital format that eclipsed it in less than a decade. She also traces the Florida Studio’s parallel existence as a part of The Magic of Disney Animation, a living theme park attraction where Lescher and her colleagues worked in full view of Walt Disney World guests eager to experience the magic of the company’s legendary animation process.

A ground-level look at the entertainment giant, The Disney Animation Renaissance profiles the people and purpose behind a little-known studio during a historic era.

AUTHOR BIOGRAPHY
Mary E. Lescher (1957-2019) was an animator, art historian, and museum curator. She worked as a cameraperson and scene planner for Walt Disney Feature Animation and DisneyToon Studios from 1989 to 2006. The exhibits she curated include Collectibility: Art and Commodity from the Disney Renaissance and The Florida Studio: Disney Art and Artifact.
REVIEWS
"Sharp and filled with knowledge. . . . The book shines a light on the Florida studio's legacy within the wider Disney history and its impact during the Disney Renaissance can't be undersold." --Boardwalk Times


"Lescher’s admiring narrative, which incorporates her firsthand experience and interviews with fellow artists, illuminates the talent of Disney animators. Readers who cherish all things House of Mouse will find much to appreciate." --Publishers Weekly


"An academic monograph that is also accessible to Disney animation and parks fans. . . . Animation fans will lock onto the history of the films that the studio contributed to making. Parks fans cannot help but be fascinated by the evolution of the attraction and the perceptions of the animators behind the glass. And most of all, the work shows how serious academic studies on animation endeavors can provide us with valuable lessons about business, technology, innovation, and culture. " --Between Disney