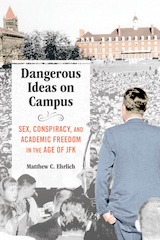 In 1960, University of Illinois professor Leo Koch wrote a public letter condoning premarital sex. He was fired. Four years later, a professor named Revilo Oliver made white supremacist remarks and claimed there was a massive communist conspiracy. He kept his job.

Matthew Ehrlich revisits the Koch and Oliver cases to look at free speech, the legacy of the 1960s, and debates over sex and politics on campus. The different treatment of the two men marked a fundamental shift in the understanding of academic freedom. Their cases also embodied the stark divide over beliefs and values--a divide that remains today. Ehrlich delves into the issues behind these academic controversies and places the events in the context of a time rarely associated with dissent, but in fact a harbinger of the social and political upheavals to come.

An enlightening and entertaining history, Dangerous Ideas on Campus illuminates how the university became a battleground for debating America's hot-button issues.