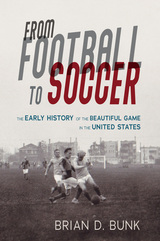 Across North America, native peoples and colonists alike played a variety of kicking games long before soccer's emergence in the late 1800s. Brian D. Bunk examines the development and social impact of these sports through the rise of professional soccer after World War I. As he shows, the various games called football gave women an outlet as athletes and encouraged men to form social bonds based on educational experience, occupation, ethnic identity, or military service. Football also followed young people to college as higher education expanded in the nineteenth century. University play, along with the arrival of immigrants from the British Isles, helped spark the creation of organized soccer in the United States—and the beautiful game's transformation into a truly international sport.

A multilayered look at one game’s place in American life, From Football to Soccer refutes the notion of the U.S. as a land outside of football history.

AUTHOR BIOGRAPHY
Brian D. Bunk is a senior lecturer in the history department at the University of Massachusetts. He is the author of Ghosts of Passion: Martyrdom, Gender, and the Origins of the Spanish Civil War and coeditor of Nation and Conflict in Modern Spain: Essays in Honor of Stanley G. Payne.
REVIEWS
"An excellent addition. . . From Football to Soccer undoubtedly adds much to the historiography of soccer in the United States." --Journal of Popular Culture


"Bunk presents an innovative look at early American soccer history that should help put to rest any notion of the United States as a place exceptional among soccer-playing nations. Individual chapters within From Football to Soccer can stand alone as readings for undergraduate courses, and the book is a valuable resource for all who study the history of football codes." --Journal of Sport History


"An important addition to the publisher’s Sport and Society series. . . . Recommended." --Choice