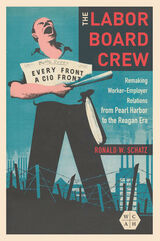 Ronald W. Schatz tells the story of the team of young economists and lawyers recruited to the National War Labor Board to resolve union-management conflicts during the Second World War. The crew (including Clark Kerr, John Dunlop, Jean McKelvey, and Marvin Miller) exerted broad influence on the U.S. economy and society for the next forty years. They handled thousands of grievances and strikes. They founded academic industrial relations programs. When the 1960s student movement erupted, universities appointed them as top administrators charged with quelling the conflicts. In the 1970s, they developed systems that advanced public sector unionization and revolutionized employment conditions in Major League Baseball.

Schatz argues that the Labor Board vets, who saw themselves as disinterested technocrats, were in truth utopian reformers aiming to transform the world. Beginning in the 1970s stagflation era, they faced unforeseen opposition, and the cooperative relationships they had fostered withered. Yet their protégé George Shultz used mediation techniques learned from his mentors to assist in the integration of Southern public schools, institute affirmative action in industry, and conduct Cold War negotiations with Mikhail Gorbachev.

AUTHOR BIOGRAPHY
Ronald W. Schatz is a professor of history at Wesleyan University. He is the author of The Electrical Workers: A History of Labor at General Electric and Westinghouse, 1923–60.
REVIEWS
"A fascinating and unusual book that traces the emergence and impact of a generation of labor relations professionals who left their stamp not only on the field in which they were trained but also higher education, urban politics, foreign policy, sports and much more." --ILR Review


"Masterfully crisp and energetic writing." --Chronicle of the National Academy of Arbitrators


"Amazing new book. . . . Getting past inertia and suspicion has been difficult in an era of neoliberalism and hyper-nationalist politics. Even if the world of the Labor Board vets no longer exists, it was arguably the period American workers did their best economically. In helping us to rethink assumptions about the era, Schatz has done admirable work." --Register of the Kentucky Historical Society