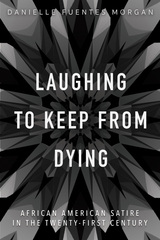 By subverting comedy's rules and expectations, African American satire promotes social justice by connecting laughter with ethical beliefs in a revolutionary way. Danielle Fuentes Morgan ventures from Suzan-Lori Parks to Leslie Jones and Dave Chappelle to Get Out and Atlanta to examine the satirical treatment of race and racialization across today's African American culture. Morgan analyzes how African American artists highlight the ways that society racializes people and bolsters the powerful myth that we live in a "post-racial" nation. The latter in particular inspires artists to take aim at the idea racism no longer exists or the laughable notion of Americans "not seeing" racism or race. Their critique changes our understanding of the boundaries between staged performance and lived experience and create ways to better articulate Black selfhood.

Adventurous and perceptive, Laughing to Keep from Dying reveals how African American satirists unmask the illusions and anxieties surrounding race in the twenty-first century.


"In Laughing to Keep from Dying, Danielle Fuentes Morgan crafts an innovative and well-considered account of African-American satire. . . . Morgan's prose is clear and engaging, and her language accessible and compelling." --Journal of American Culture


"A satisfying read for anyone with an interest in how entertainment responds to a shifting social landscape. " --Atlantic


Acknowledgments< br/>Introduction: The Satirical Mode and African American Identity< br/>1 "The Storm, the Whirlwind, and the Earthquake": Slavery and the Satiric Impulse< br/>2 "Race is Just a Made-Up Thing": Abject Blackness and Racial Anxiety< br/>3 "When Keeping It Real Goes Wrong": Vulnerability and Satiric Misfires< br/>4 "How Long Has This Been Goin’ On, This Thang?": Centering Race in the Twenty-First Century< br/>Conclusion: Black Futurity and the Future of African American Satire< br/>Notes< br/>Works Cited< br/>Index