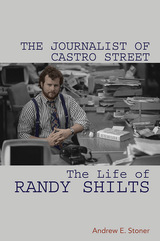 As the acclaimed author of And the Band Played On, Randy Shilts became the country's most recognized voice on the HIV/AIDS epidemic. His success emerged from a relentless work ethic and strong belief in the power of journalism to help mainstream society understand not just the rising tide of HIV/AIDS but gay culture and liberation.

In-depth and dramatic, Andrew E. Stoner's biography follows the remarkable life of the brash, pioneering journalist. Shilts's reporting on AIDS in San Francisco broke barriers even as other gay writers and activists ridiculed his overtures to the mainstream and labeled him a traitor to the movement, charges the combative Shilts forcefully answered. Behind the scenes, Shilts overcame career-threatening struggles with alcohol and substance abuse to achieve the notoriety he had always sought, while the HIV infection he had purposely kept hidden began to take his life.

Filled with new insights and fascinating detail, The Journalist of Castro Street reveals the historic work and passionate humanity of the legendary investigative reporter and author.

AUTHOR BIOGRAPHY
Andrew E. Stoner is an associate professor of communication studies at California State University, Sacramento. His books include Campaign Crossroads: Presidential Politics in Indiana from Lincoln to Obama.
REVIEWS
"Stoner has crafted an amazingly exhaustive biography of Shilts . . . Through interviews, oral histories, Shilts’s own journals, and archival materials, Stoner provides a deeper, more nuanced understanding of Shilts, his work, his advocacy, and his legacy." --Journalism History


"[The Journalist of Castro Street] is an important addition to the HIV/AIDS archive, particularly thanks to its careful discussion of political figures like Harvey Milk, George Moscone, Dan White, and Gaëtan Dugas." --Media History