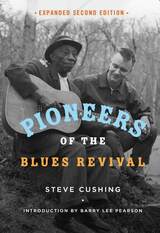 Steve Cushing, the award-winning host of the nationally syndicated public radio staple Blues Before Sunrise, has spent more than thirty years observing and participating in the Chicago blues scene. In the expanded second edition of Pioneers of the Blues Revival, Cushing adds new interviewees to the roster of prominent white researchers and enthusiasts whose advocacy spearheaded the blues' crossover into the mainstream starting in the 1960s. Rare interview material with experts like Mack McCormick supplements dialogues with Paul Garon, Gayle Dean Wardlow, Paul Oliver, Sam Charters, and others in renewing lively debates and providing first-hand accounts of the era and movement. Throughout, the participants chronicle lifetimes spent loving, finding, collecting, reissuing, and producing records. They also recount relationships with essential blues musicians like Mississippi John Hurt, Son House, Skip James, and Bukka White—connections that allowed the two races to learn how to talk to each other in a still-segregated world.
AUTHOR BIOGRAPHY
Steve Cushing has hosted Blues Before Sunrise for over thirty years. He is the author of Blues Before Sunrise: The Radio Interviews. Barry Lee Pearson is a professor of English at the University of Maryland and the author of Jook Right On: Blues Stories and Blues Storytellers.
REVIEWS
"The two additional pieces in Pioneers of the Blues Revival requires anybody who was at all taken by the first edition to buy the second edition. The pieces on McCormick and Garon are that essential for the book's completeness."--Robert Pruter, Real Blues Forum


"The book makes an extraordinary contribution to the field. . . . The author creates a rich portrait of the whole blues revival movement."--Robert Pruter, author of Chicago Soul


"Any student or historian with a serious interest in country Blues, urban Blues, jug bands, Jazz, gospel, and related styles will find this book very informative and illuminating. Thanks to Cushing we may all learn a good deal more about a diverse lot of individuals who passions were ignited by the Blues."--Journal of the Illinois State Historical Society