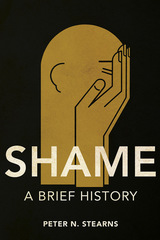 Shame varies as an individual experience and in its manifestations across time and cultures. Groups establish identity and enforce social behaviors through shame and shaming, while attempts at shaming often provoke a social or political backlash. Yet historians often neglect shame’s power to complicate individual, international, cultural, and political relationships.

Peter N. Stearns draws on his long career as a historian of emotions to provide the foundational text on shame’s history and how this history contributes to contemporary issues around the emotion. Summarizing current research, Stearns unpacks the major debates that surround this complex emotion. He also surveys the changing role of shame in the United States from the nineteenth century to today, including shame’s revival as a force in the 1960s and its place in today’s social media. Looking ahead, he maps the abundant opportunities for future historical research and historically informed interdisciplinary scholarship.