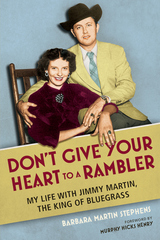 As charismatic and gifted as he was volatile, Jimmy Martin recorded dozens of bluegrass classics and co-invented the high lonesome sound. Barbara Martin Stephens became involved with the King of Bluegrass at age seventeen. Don't Give your Heart to a Rambler tells the story of their often tumultuous life together.

Barbara bore his children and took on a crucial job as his booking agent when the agent he was using failed to obtain show dates for the group. Female booking agents were non-existent at that time but she persevered and went on to become the first female booking agent on Music Row. She also endured years of physical and emotional abuse at Martin's hands. With courage and candor, Barbara tells of the suffering and traces the hard-won personal growth she found inside motherhood and her work. Her vivid account of Martin's explosive personality and torment over his exclusion from the Grand Ole Opry fill in the missing details on a career renowned for being stormy. Barbara also shares her own journey, one of good humor and proud achievements, and filled with fond and funny recollections of the music legends and ordinary people she met, befriended, and represented along the way.

Straightforward and honest, Don't Give your Heart to a Rambler is a woman's story of the world of bluegrass and one of its most colorful, conflicted artists.

AUTHOR BIOGRAPHY
Barbara Martin Stephens worked for many years as a booking agent and promoter, first for Jimmy Martin and then for numerous other bluegrass and country music performers.
REVIEWS
"Set in the heyday of bluegrass and country music, Don't Give Your Heart to a Rambler is filled with famous names . . . and sparkles with the excitement of those times."--Bookreporter.com


"[Don't Give your Heart to a Rambler] stands as a testament to survival, the will to persist, and the importance of choices in forging a life."--Ted Lehman's Bluegrass, Books, and Brainstorms


"Don't Give Your Heart to a Rambler offers a fascinating look into the world of bluegrass during the 1950s and 60s." --Bluegrass Breakdown

TABLE OF CONTENTS
Title
Contents
Foreword Murphy Hicks Henry
Preface
Acknowledgments
Introduction: Something About Me
1. Meeting Jimmy Martin
2. Moving On
3. Having Babies
4. Back and Forth
5. Up and Down
6. Booking Jimmy Martin
7. Funerals
8. Living with Jimmy Martin
9. Showers and Surprises
10. You’re Gonna Change or I’m Gonna Leave
11. Life after Jimmy Martin
12. All My Children
13. Life in Florida and the Kids Return
14. Letting Go of Jimmy Martin
15. Through It All, No Regrets
16. Jimmy Martin’s Family
Epilogue
Index