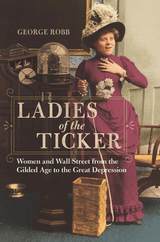 Long overlooked in histories of finance, women played an essential role in areas such as banking and the stock market during the late nineteenth and early twentieth centuries. Yet their presence sparked ongoing controversy. Hetty Green’s golden touch brought her millions, but she outraged critics with her rejection of domesticity. Progressives like Victoria Woodhull, meanwhile, saw financial acumen as more important for women than the vote.

George Robb’s pioneering study explores the financial methods, accomplishments, and careers of three generations of women. Plumbing sources from stock brokers’ ledgers to media coverage, Robb reveals the many ways women invested their capital while exploring their differing sources of information, approaches to finance, interactions with markets, and levels of expertise. He also rediscovers the forgotten women bankers, brokers, and speculators who blazed new trails--and sparked public outcries over women’s unsuitability for the predatory rough-and-tumble of market capitalism.

Entertaining and vivid with details, Ladies of the Ticker sheds light on the trailblazers who transformed Wall Street into a place for women’s work.

AUTHOR BIOGRAPHY
George Robb is a professor of history at William Paterson University. He is the author of White-Collar Crime in Modern England and British Culture and the First World War.
REVIEWS
"Elegantly written, Robb's book provides a much-needed investigation of both the perception and the reality of women investors from the Gilded Age to the Great Depression." --Economic History Reviews


"Well researched, engagingly written, and nicely illustrated, the book succeeds not only in shedding light on how women behaved in financial markets but also in excavating the broader investment culture of the Gilded Age, with its clairvoyants-turned-stockbrokers, its bucket shops, and its get-rich-quick schemes."--Enterprise & Society