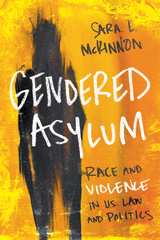 Women filing gender-based asylum claims long faced skepticism and outright rejection within the United States immigration system. Despite erratic progress, the United States still fails to recognize gender as an established category for experiencing persecution. Gender exists in a sort of limbo segregated from other aspects of identity and experience.

Sara L. McKinnon exposes racialized rhetorics of violence in politics and charts the development of gender as a category in American asylum law. Starting with the late 1980s, when gender-based requests first emerged in case law, McKinnon analyzes gender- and sexuality-related cases against the backdrop of national and transnational politics. Her focus falls on cases as diverse as Guatemalan and Salvadoran women sexually abused during the Dirty Wars and transgender asylum seekers from around the world fleeing brutally violent situations. She reviews the claims, evidence, testimony, and message strategies that unfolded in these legal arguments and decisions, and illuminates how legal decisions turned gender into a political construct vulnerable to American national and global interests. She also explores myriad related aspects of the process, including how subjects are racialized and the effects of that racialization, and the consequences of policies that position gender as a signifier for women via normative assumptions about sex and heterosexuality.

Wide-ranging and rich with human detail, Gendered Asylum uses feminist, immigration, and legal studies to engage one of the hotly debated issues of our time.