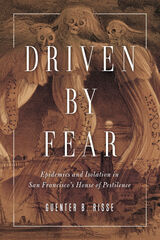 From the late nineteenth century until the 1920s, authorities required San Francisco's Pesthouse to segregate the diseased from the rest of the city. Although the Pesthouse stood out of sight and largely out of mind, it existed at a vital nexus of civic life where issues of medicine, race, class, environment, morality, and citizenship entwined and played out. Guenter B. Risse places this forgotten institution within an emotional climate dominated by widespread public dread and disgust. In Driven by Fear, he analyzes the unique form of stigma generated by San Franciscans. Emotional states like xenophobia and racism played a part. Yet the phenomenon also included competing medical paradigms and unique economic needs that encouraged authorities to protect the city's reputation as a haven of health restoration. As Risse argues, public health history requires an understanding of irrational as well as rational motives. To that end he delves into the spectrum of emotions that drove extreme measures like segregation and isolation and fed psychological, ideological, and pragmatic urges to scapegoat and stereotype victims--particularly Chinese victims--of smallpox, leprosy, plague, and syphilis.

Filling a significant gap in contemporary scholarship, Driven by Fear looks at the past to offer critical lessons for our age of bioterror threats and emerging infectious diseases.

AUTHOR BIOGRAPHY
Guenter B. Risse is a professor emeritus of the history of medicine at the University of California, San Francisco. His books include Plague, Fear, and Politics in San Francisco's Chinatown and Mending Bodies, Saving Souls: A History of Hospitals.
REVIEWS
"This study of the pesthouse, an institution designed to cope with the fear of contagious disease, is a significant contribution to the history of American medicine and public health as well as the history of immigration and ethnicity."--Journal of American Ethnic History


"With this timely book, Risse has made an important contribution to the critical reflection of ongoing reorganisations and the apparent strengthening of federal powers in matters of quarantine and epidemic preparedness in the USA."--Social History of Medicine