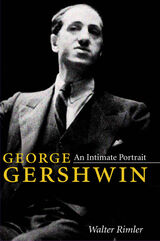 George Gershwin lived with purpose and gusto, but with melancholy as well, for he was unable to make a place for himself--no family of his own and no real home in music.

He and his siblings received little love from their mother and no direction from their father. Older brother and lyricist Ira managed to create a home when he married Leonore Strunsky, a hard-edged woman who lived for wealth and status. The closest George came to domesticity was through his longtime relationship with Kay Swift. She was his lover, musical confidante, and fellow composer. But she remained married to another man while he went endlessly from woman to woman. Only in the final hours of his life, when they were separated by a continent, did he realize how much he needed her. Fatally ill, unprotected by (and perhaps estranged from) Ira, he was exiled by Leonore from the house she and the brothers shared, and he died horribly and alone at the age of thirty-eight.

Nor was Gershwin able to find a satisfying musical harbor. For years his songwriting genius could be expressed only in the ephemeral world of show business, as his brilliance as a composer of large-scale works went unrecognized by highbrow music critics. When he resolved this quandary with his opera Porgy and Bess, the critics were unable to understand or validate it. Decades would pass before this, his most ambitious composition, was universally regarded as one of music's lasting treasures and before his stature as a great composer became secure.

In George Gershwin: An Intimate Portrait, Walter Rimler makes use of fresh sources, including newly discovered letters by Kay Swift as well as correspondence between and interviews with intimates of Ira and Leonore Gershwin. It is written with spirited prose and contains more than two dozen photographs.

AUTHOR BIOGRAPHY
Walter Rimler is the author of Not Fade Away: A Comparison of Jazz Age With Rock Era Pop Song Composers and A Gershwin Companion. His articles and fiction have appeared in Midstream, Prism International, and other publications.
REVIEWS
"More thorough biographies than Mr. Rimler's slender volume exist ... but for those of us interested less in the technical details of Gershwin's music and its performance than in the comet called George Gershwin that blazed briefly across American skies, Mr. Rimler is the astronomer of choice."The Wall Street Journal

"Compact in length and voluminous in its details, Walter Rimler's study of Gershwin is freighted with melancholy—an appropriate parallel with Gershwin's own life."--TLS


"An engrossing, well-written look at Gershwin, the composer and the man, with emphasis on the man."--Choice