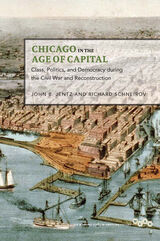 In this sweeping interpretive history of mid-nineteenth-century Chicago, historians John B. Jentz and Richard Schneirov boldly trace the evolution of a modern social order. Combining a mastery of historical and political detail with a sophisticated theoretical frame, Jentz and Schneirov examine the dramatic capitalist transition in Chicago during the critical decades from the 1850s through the 1870s, a period that saw the rise of a permanent wage worker class and the formation of an industrial upper class.

Jentz and Schneirov demonstrate how a new political economy, based on wage labor and capital accumulation in manufacturing, superseded an older mercantile economy that relied on speculative trading and artisan production. The city's leading business interests were unable to stabilize their new system without the participation of the new working class, a German and Irish ethnic mix that included radical ideas transplanted from Europe. Jentz and Schneirov examine how debates over slave labor were transformed into debates over free labor as the city's wage-earning working class developed a distinctive culture and politics.

The new social movements that arose in this era--labor, socialism, urban populism, businessmen's municipal reform, Protestant revivalism, and women's activism--constituted the substance of a new post-bellum democratic politics that took shape in the 1860s and '70s. When the Depression of 1873 brought increased crime and financial panic, Chicago's new upper class developed municipal reform in an attempt to reassert its leadership. Setting local detail against a national canvas of partisan ideology and the seismic structural shifts of Reconstruction, Chicago in the Age of Capital vividly depicts the upheavals integral to building capitalism.
AUTHOR BIOGRAPHY
John B. Jentz is a research and instructional services librarian at Marquette University and coeditor of German Workers in Industrial Chicago, 1850–1910: A Comparative Perspective.Richard Schneirov is a professor of history at Indiana State University and the author of Labor and Urban Politics: Class Conflict and the Origins of Modern Liberalism in Chicago, 1864–97.
REVIEWS
Award of Superior Achievement, Illinois State Historical Society (ISHS), 2013.
— Illinois State Historical Society (ISHS)

TABLE OF CONTENTS
Cover
Title Page
Copyright Page
Contents
List of Illustrations
Preface
Introduction
1. The City
2. The Internationale of the Citizen Workers: From Slavery to the Labor Question
3. The Eight-Hour Day and the Legitimacy of Wage Labor
4. Chicago's Immigrant Working Class and the Rise of Urban Populism, 1867–73
5. Class and Politics during the Depression of the 1870s
6. Combat in the Streets: The Railroad Strike of 1877 and Its Consequences
7. Regime Change
Notes
Index
Back Cover