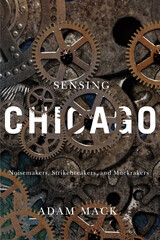 A hundred years ago and more, a walk down a Chicago street invited an assault on the senses. Untiring hawkers shouted from every corner. The manure from thousands of horses lay on streets pooled with molasses and puddled with kitchen grease. Odors from a river gelatinous and lumpy with all manner of foulness mingled with the all-pervading stench of the stockyard slaughterhouses.

In Sensing Chicago, Adam Mack lets fresh air into the sensory history of Chicago in the nineteenth and early twentieth centuries by examining five case studies: the Chicago River, the Great Fire, the 1894 Pullman Strike, the publication of Upton Sinclair's The Jungle, and the rise and fall of the White City amusement park. His vivid recounting of the smells, sounds, and tactile miseries of city life reveals how input from the five human senses influenced the history of class, race, and ethnicity in the city. At the same time, he transports readers to an era before modern refrigeration and sanitation, when to step outside was to be overwhelmed by the odor and roar of a great city in progress.