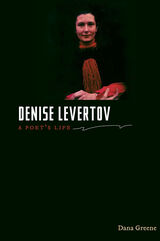 Kenneth Rexroth called Denise Levertov (1923–1997) "the most subtly skillful poet of her generation, the most profound, . . . and the most moving." Author of twenty-four volumes of poetry, four books of essays, and several translations, Levertov became a lauded and honored poet. Born in England, she published her first book of poems at age twenty-three, but it was not until she married and came to the United States in 1948 that she found her poetic voice, helped by the likes of William Carlos Williams, Robert Duncan, and Robert Creeley. Shortly before her death in 1997, the woman who claimed no country as home was nominated to be America's poet laureate.

Levertov was the quintessential romantic. She wanted to live vividly, intensely, passionately, and on a grand scale. She wanted the persistence of Cézanne and the depth and generosity of Rilke. Once she acclimated herself to America, the dreamy lyric poetry of her early years gave way to the joy and wonder of ordinary life. By the late 1960s and early 1970s, however, her poems began to engage the issues of her times. Vehement and strident, her poetry of protest was both acclaimed and criticized. The end of both the Vietnam War and her marriage left her mentally fatigued and emotionally fragile, but gradually, over the span of a decade, she emerged with new energy. The crystalline and luminous poetry of her last years stands as final witness to a lifetime of searching for the mystery embedded in life itself. Through all the vagaries of life and art, her response was that of a "primary wonder."

In this illuminating biography, Dana Greene examines Levertov's interviews, essays, and self-revelatory poetry to discern the conflict and torment she both endured and created in her attempts to deal with her own psyche, her relationships with family, friends, lovers, colleagues, and the times in which she lived. Denise Levertov: A Poet's Life is the first complete biography of Levertov, a woman who claimed she did not want a biography, insisting that it was her work that she hoped would endure. And yet she confessed that her poetry in its various forms--lyric, political, natural, and religious--derived from her life experience. Although a substantial body of criticism has established Levertov as a major poet of the later twentieth century, this volume represents the first attempt to set her poetry within the framework of her often tumultuous life.
AUTHOR BIOGRAPHY
Dana Greene is Dean Emerita of Oxford College of Emory University. Her other books include Evelyn Underhill: Artist of the Infinite Life and The Living of Maisie Ward.
REVIEWS
Honorable Mention in Biography, Georgia Author of the Year Awards, 2013.
— Georgia Author of the Year Awards

TABLE OF CONTENTS
Cover
Title page
Copyright
CONTENTS
Credits
A Word of Gratitude
Prologue
1. "A Definite and Peculiar Destiny"
2. In Search of Voice
3. The Making of a Poet
4. "A Cataract Filming Over My Inner Eyes"
5. "Staying Alive"
6. Endings
7. Coming to a New Country
8. "The Thread"
9. "Making Peace"
10. The Borderland
11. Bearing Witness
12. "Once Only"
Epilogue
Notes
Selected Bibliography
Index