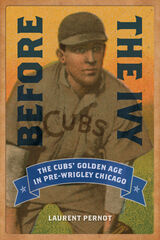 All Cub fans know from heartbreak and curse-toting goats. Fewer know that, prior to moving to the north side in 1916, the team fielded powerhouse nines that regularly claimed the pennant. Before the Ivy offers a grandstand seat to a golden age:

WONDER at experiments with square bats and corked balls, the scandal of Sunday games and pre-game booze-ups, the brazen spitters and park dimensions changed to foil Ty Cobb

THRILL to the poetic double-play combo of Tinker, Evers, and Chance even as they throw tantrums at umpires and punches at each other

Rich with Hall of Fame personalities and oddball stories, Before the Ivy opens a door to Chicago's own field of dreams and serves as every Cub fan's guide to a time when thoughts of "next year" filled rival teams with dread.

AUTHOR BIOGRAPHY
Born and raised in France, Laurent Pernot came to the U.S. as a Chicago-area foreign-exchange student in 1988 and caught ’89 Cubs playoff fever. He is the executive vice chancellor of the City Colleges of Chicago, and lives in the city with his wife Jennifer and sons Gabriel, Luca and Leo.
REVIEWS
"Quite readable. . . . Pernot does not ultimately suggest there is a cure for Cub fever, but he certainly gives us the basis for a better understanding of the phenomenon."--Aethlon: The Journal of Sport Literature


"A well-written and entertaining read, filled with copious illustrations and photos that might sustain the rabid Cub's fan base as they 'wait until next year.'"--Journal of Sport History


"An excellent reference of the glory days for those poor fans caught up in the endless cycles of 'Wait Until Next Year' on the Northside of Chicago."--SABR's The Inside Game

TABLE OF CONTENTS
Cover
Title Page
Copyright
Contents
Introduction
1. From Little English Acorn to Giant American Oak
2. The Baseball Frontier
3. Chicago’s Hired Guns
4. The Phoenix
5. Chicago’s Own League
6. The Birth of a Dynasty
7. Keeping the Stockings White
8. West Side Home
9. The National League Ain’t the World
10. The Sabbath Battles
11. “It Was Straight Whiskey”
12. “Mighty Casey Has Struck Out”
13. Baseball Missionaries
14. The Lean Years
15. Back to the West Side
16. From Colts to Cubs
17. The Saddest of Possible Words?
18. “The Fellows Who Made the Game”
19. Out in Left Field?
20. Again, Chicago is Champion
21. Covering the Bases
22. Three More Pennants
23. Going, Going . . .
24. Gone
Appendix A. About the Ballparks: Stadiums of the Chicago Cubs and their Ancestors
Appendix B. The Team through the Decades
Notes
Bibliography
Index