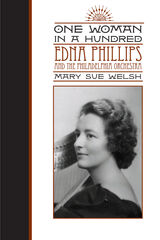 Gifted harpist Edna Phillips (1907–2003) joined the Philadelphia Orchestra in 1930, becoming not only that ensemble's first female member but also the first woman to hold a principal position in a major American orchestra. Plucked from the Curtis Institute of Music in the midst of her studies, Phillips was only twenty-three years old when Leopold Stokowski, one of the twentieth century's most innovative and controversial conductors, named her principal harpist. This candid, colorful account traces Phillips's journey through the competitive realm of Philadelphia's virtuoso players, where she survived--and thrived--thanks to her undeniable talent, determination, and lively humor.
Drawing on extensive interviews with Phillips, her family, and colleagues as well as archival sources, One Woman in a Hundred chronicles the training, aspirations, setbacks, and successes of this pioneering woman musician. Mary Sue Welsh recounts numerous insider stories of rehearsal and performance with Stokowski and other renowned conductors of the period such as Arturo Toscanini, Fritz Reiner, Otto Klemperer, Sir Thomas Beecham, and Eugene Ormandy. She also depicts Phillips's interactions with fellow performers, the orchestra management, and her teacher, the wily and brilliant Carlos Salzedo. Blessed with a nimble wit, Phillips navigated a plethora of challenges, ranging from false conductors' cues to the advances of the debonair Stokowski and others. She remained with the orchestra through some of its most exciting years from 1930 to 1946 and was instrumental in fostering harp performance, commissioning many significant contributions to the literature.
This portrait of Phillips's exceptional tenure with the Philadelphia Orchestra also reveals the behind-the-scenes life of a famous orchestra during a period in which Rachmaninoff declared it "the finest orchestra the world has ever heard." Through Phillips's perceptive eyes, readers will watch as Stokowski melds his musicians into a marvelously flexible ensemble; world-class performers reach great heights and make embarrassing flubs; Greta Garbo comes to Philadelphia to observe her lover Leopold Stokowski at work; and the orchestra encounters the novel experience of recording for Walt Disney's Fantasia. A colorful glimpse into a world-class orchestra at the height of its glory, One Woman in a Hundred tells the fascinating story of one woman brave enough and strong enough to overcome historic barriers and pursue her dreams.

AUTHOR BIOGRAPHY
Mary Sue Welsh is a former executive director of the Bach Festival of Philadelphia, where she worked with its chair Edna Phillips. She lives in Philadelphia.

"Transforms into a riveting tale that spans the period from Phillip's audition to the second World War.  Recommended."--Library Journal


"Edna Phillips's story is significant and worth telling, and this work relates the trials, tribulations, and successes of this woman pioneer in orchestral performance. Set against the background of some of the prominent musicians of the twentieth century, One Woman in a Hundred will appeal to many general readers and music lovers."--J. Michele Edwards, professor emerita of music, Macalester College

TABLE OF CONTENTS
Cover
Title Page
Copyright
Contents
Foreword
Preface and Acknowledgments
1. In the Lions’ Den
2. A Formidable Arena
3. The Little Goat
4. Keeping Up with the Speed Kings
5. “One Step Ahead of the Sheriff”
6. A Season of Firsts
7. “Answer Yes or No”
8. “Mortally Wounded”
9. War on Broad Street
10. Honor among Women
11. A Month Out of School
12. On to Fantasia
13. A Silent Exit
14. Cajoling and Seducing Composers
15. War Stories
Afterword
Appendix
Notes
Bibliography
Index