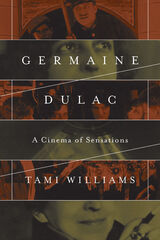 Best known for directing the Impressionist classic The Smiling Madame Beudet and the first Surrealist film The Seashell and the Clergyman, Germaine Dulac, feminist and pioneer of 1920s French avant-garde cinema, made close to thirty fiction films as well as numerous documentaries and newsreels. Through her filmmaking, writing, and cine-club activism, Dulac’s passionate defense of the cinema as a lyrical art and social practice had a major influence on twentieth century film history and theory.

In Germaine Dulac: A Cinema of Sensations, Tami Williams makes unprecedented use of the filmmaker's personal papers, production files, and archival film prints to produce the first full-length historical study and critical biography of Dulac. Williams's analysis explores the artistic and sociopolitical currents that shaped Dulac's approach to cinema while interrogating the ground breaking techniques and strategies she used to critique conservative notions of gender and sexuality. Moving beyond the director’s work of the 1920s, Williams examines Dulac's largely ignored 1930s documentaries and newsreels establishing clear links with the more experimental impressionist and abstract works of her early period.

This vivid portrait will be of interest to general readers, as well as to scholars of cinema and visual culture, performance, French history, women’s studies, queer cinema, in addition to studies of narrative avant-garde, experimental, and documentary film history and theory.

Tami Williams is an assistant professor of English and film studies at the University of Wisconsin-Milwaukee.