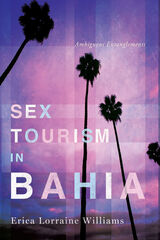 For nearly a decade, Brazil has surpassed Thailand as the world's premier sex tourism destination. As the first full-length ethnography of sex tourism in Brazil, this pioneering study treats sex tourism as a complex and multidimensional phenomenon that involves a range of activities and erotic connections, from sex work to romantic transnational relationships. Erica Lorraine Williams explores sex tourism in the Brazilian state of Bahia from the perspectives of foreign tourists, tourism industry workers, sex workers who engage in liaisons with foreigners, and Afro-Brazilian men and women who contend with foreigners' stereotypical assumptions about their licentiousness. She shows how the Bahian state strategically exploits the touristic desire for exotic culture by appropriating an eroticized blackness and commodifying the Afro-Brazilian culture in order to sell Bahia to foreign travelers.