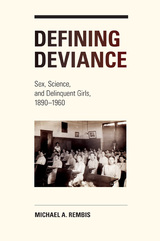 Defining Deviance analyzes how reformers in the late nineteenth and early twentieth centuries perceived delinquent girls and their often troubled lives. Drawing on exclusive access to thousands of case files and other documents at the State Training School in Geneva, Illinois, Michael A. Rembis uses Illinois as a case study to show how implementation of involuntary commitment laws in the United States reflected eugenic thinking about juvenile delinquency.

Much more than an institutional history, Defining Deviance examines the cases of vulnerable young women to reveal the centrality of sex, class, gender, and disability in the formation of scientific and social reform. Rembis recounts the contestations between largely working-class teenage girls and the mostly female reformers and professionals who attempted to diagnose and treat them based on changing ideas of eugenics, gender, and impairment. He shows how generational roles and prevailing notions of gender and sexuality influenced reformers to restrict, control, and institutionalize undesirable "defectives" within society, and he details the girls' attempts to influence methods of diagnosis, discipline, and reform.

In tracing the historical evolution of ideologies of impairment and gender to show the central importance of gender to the construction of disability, Rembis reveals the larger national implications of the cases at the State Training School. His study provides new insights into the treatment of young women whom the dominant society perceived as threats to the sexual and eugenic purity of modern America.
AUTHOR BIOGRAPHY
Michael A. Rembis is the director of the Center for Disability Studies and an assistant professor of history at the University at Buffalo.
REVIEWS

"[Defining Deviance] brings to life new material on the policing of adolescent female sexuality and provides a new perspective on the rise of the therapeutic state."--Social Service Review


Acknowledgments   ix
Introduction   1
1. "Segregation of Mental Defectives as a Preventive of Crime, Immorality, and Inefficiency"   13
2. "Defective Children in the Juvenile Court"   33
3. "The Relation Between Morality and Intellect"   53
4. "I Ain't Had Much Schooling"   72
5. "How a Girl of the Road Wins Rides and Influences Motorists"   94
6. "Little Savages" and "Psychopathic Deviates"   119
Epilogue. Defining Deviance in the Late Twentieth Century: The New "New Girl Problem"?   143
Appendix A. Illinois' Involuntary Commitment Law   149
Appendix B. Illinois' Model Sterilization Law   158
Notes   163
Selected Bibliography   199
Index   221
Illustrations follow page 52