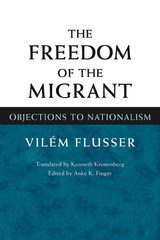 Vilém Flusser was one of the most fascinating and original European thinkers of the late twentieth century. In this collection of his essays on emigration, nationalism, and information theory, he raises questions about the viability of ideas of national identity in a world whose borders are becoming increasingly arbitrary and permeable. Flusser argues that modern societies are in flux, with traditional linear and textual epistemologies being challenged by global circulatory networks and a growth in visual stimulation. Beyond globalization, Flusser's ideas about communication and identity are rooted in the Judeo-Christian concept of self-determination and self-realization through recognition of the other.
AUTHOR BIOGRAPHY
Vilém Flusser (1920-91) was a German-Jewish philosopher from Prague who fled in 1940 to Brazil, where he was a professor of philosophy of communication and wrote a daily newspaper column. In 1972, he moved to France and wrote books in both German and Portuguese, including The Shape of Things: A Philosophy of Design, Toward a Philosophy of Photography, and From Subject to Project: Becoming Human.Anke K. Finger is an associate professor of German studies and comparative literature at the University of Connecticut. Kenneth Kronenberg is a professional translator and the author/translator of Lives and Letters of an Immigrant Family.
REVIEWS
"A smooth, fluid translation of an excellent collection of essays by this timely and necessary thinker."--Andreas Ströhl, editor of Vilém Flusser's Writings

"Flusser emerges out of these writings as an engaging and playful thinker, one who moves deftly from deeply personal reflections to abstract theory often within the same paragraph. This is at once part of the charm and the difficulty of his writing; his simple observations gesture toward rich layers of meaning that lie beneath the surface awaiting excavation."--Canadian Literature