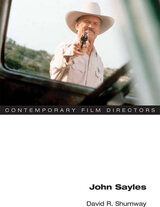 John Sayles is the very paradigm of the contemporary independent filmmaker. By raising much of the funding for his films himself, Sayles functions more independently than most directors, and he has used his freedom to write and produce films with a distinctive personal style and often clearly expressed political positions. From The Return of the Secaucus Seven to Sunshine State, his films have consistently expressed progressive political positions on issues including race, gender, sexuality, class, and disability.

In this study, David R. Shumway examines the defining characteristic of Sayles's cinema: its realism. Positing the filmmaker as a critical realist, Shumway explores Sayles's attention to narrative in critically acclaimed and popular films such as Matewan, Eight Men Out, Passion Fish, and Lone Star. The study also details the conditions under which Sayles's films have been produced, distributed, and exhibited, affecting the way in which these films have been understood and appreciated. In the process, Shumway presents Sayles as a teacher who tells historically accurate stories that invite audiences to consider the human world they all inhabit.
AUTHOR BIOGRAPHY
David R. Shumway is the director of the Humanities Center and a professor of English and literary and cultural studies at Carnegie Mellon University. His many books include Modern Love: Romance, Intimacy, and the Marriage Crisis.
REVIEWS
"An insightful and thorough study of an important film director. Bringing to bear his broad knowledge of cinema, literature, and popular culture, David R. Shumway's study will appeal to fans of Sayles's work and others interested in the politics of American cinema."--Lucy Fischer, editor of American Cinema of the 1920s: Themes and Variations