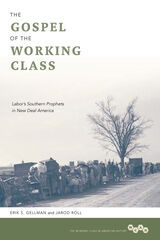 In this exceptional dual biography and cultural history, Erik S. Gellman and Jarod Roll trace the influence of two southern activist preachers, one black and one white, who used their ministry to organize the working class in the 1930s and 1940s across lines of gender, race, and geography. Owen Whitfield and Claude Williams, along with their wives Zella Whitfield and Joyce Williams, drew on their bedrock religious beliefs to stir ordinary men and women to demand social and economic justice in the eras of the Great Depression, New Deal, and Second World War.

Williams and Whitfield preached a working-class gospel rooted in the American creed that hard, productive work entitled people to a decent standard of living. Gellman and Roll detail how the two preachers galvanized thousands of farm and industrial workers for the Southern Tenant Farmers Union and the Congress of Industrial Organizations. They also link the activism of the 1930s and 1940s to that of the 1960s and emphasize the central role of the ministers' wives, with whom they established the People's Institute for Applied Religion.

This detailed narrative illuminates a cast of characters who became the two couples' closest allies in coordinating a complex network of activists that transcended Jim Crow racial divisions, blurring conventional categories and boundaries to help black and white workers make better lives. In chronicling the shifting contexts of the actions of Whitfield and Williams, The Gospel of the Working Class situates Christian theology within the struggles of some of America's most downtrodden workers, transforming the dominant narratives of the era and offering a fresh view of the promise and instability of religion and civil rights unionism.
AUTHOR BIOGRAPHY

Erik S. Gellman is an assistant professor of history at Roosevelt University in Chicago. He is the author of Death Blow to Jim Crow: The National Negro Congress and Militant Civil Rights.Jarod Roll teaches American history at the University of Sussex, England, where he directs the Marcus Cunliffe Centre for the Study of the American South. He is the author of the award-winning Spirit of Rebellion: Labor and Religion in the New Cotton South.