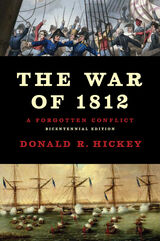 This comprehensive and authoritative history of the War of 1812, thoroughly revised for the 200th anniversary of the historic conflict, is a myth-shattering study that will inform and entertain students, historians, and general readers alike. Donald R. Hickey explores the military, diplomatic, and domestic history of our second war with Great Britain, bringing the study up to date with recent scholarship on all aspects of the war, from the Gulf of Mexico to Canada.
The newly expanded The War of 1812: A Forgotten Conflict, Bicentennial Edition includes additional information on the British forces, American Indians, and military operations such as the importance of logistics and the use and capabilities of weaponry. Hickey explains how the war promoted American nationalism and manifest destiny, stimulated peacetime defense spending, and enhanced America's reputation abroad. He also shows that the war sparked bloody conflicts between pro-war Republican and anti-war Federalist neighbors, dealt a crippling blow to American Indians, and solidified the United States's antipathy toward the British.

TABLE OF CONTENTS
Cover
Title Page
Copyright
Contents
List of Illustrations
Preface to the First Edition
Preface to the Bicentennial Edition
Introduction
1. The Road to War, 1801–1812
2. The Declaration of War
3. The Baltimore Riots
4. The Campaign of 1812
5. Raising Men and Money
6. The Campaign of 1813
7. The Last Embargo
8. The British Counteroffensive
9. The Crisis of 1814
10. The Hartford Convention
11. The Treaty of Ghent
Conclusion
A Note on Sources
Notes
Index
Back Cover