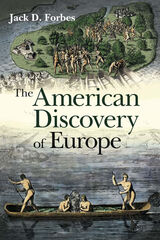 The American Discovery of Europe investigates the voyages of America's Native peoples to the European continent before Columbus's 1492 arrival in the "New World." The product of over twenty years of exhaustive research in libraries throughout Europe and the United States, the book paints a clear picture of the diverse and complex societies that constituted the Americas before 1492 and reveals the surprising Native American involvements in maritime trade and exploration. Starting with an encounter by Columbus himself with mysterious people who had apparently been carried across the Atlantic on favorable currents, Jack D. Forbes proceeds to explore the seagoing expertise of early Americans, theories of ancient migrations, the evidence for human origins in the Americas, and other early visitors coming from Europe to America, including the Norse. The provocative, extensively documented, and heartfelt conclusions of The American Discovery of Europe present an open challenge to received historical wisdom.
AUTHOR BIOGRAPHY
Jack D. Forbes was a professor emeritus of Native American studies and anthropology at the University of California, Davis. His many other books included Africans and Native Americans: The Language of Race and the Evolution of Red-Black Peoples.
REVIEWS

"A fascinating book that makes an important . . . contribution to the subject of pre-Columbian contacts between America and Europe. . . . Highly recommended."


"Provocative. . . . Turning the concept of 'discovers' on its head, Forbes dispels a lot of common assumptions about who 'discovered' whom in the Americas, in an extensive and fascinating exploration of early maritime histories of the Native Americans."