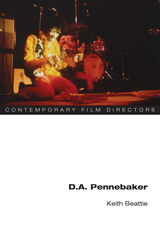 This volume is the first book-length study of the extensive career and prolific works of D.A. Pennebaker, one of the pioneers of direct cinema, a documentary form that emphasizes observation and a straightforward portrayal of events. With a career spanning decades, Pennebaker's many projects have included avant-garde experiments (Daybreak Express), ground-breaking television documentaries (Primary), celebrity films (Dont Look Back), concert films (Monterey Pop), and innovative fusions of documentary and fiction (Maidstone).

Exploring the concept of "performing the real," Keith Beattie interprets Pennebaker's films as performances in which the act of filming is in itself a performative transgression of the norms of purely observational documentary. He examines the ways in which Pennebaker's presentation of unscripted everyday performances is informed by connections between documentary filmmaking and other experimental movements such as the New American Cinema. Through his collaborations with such various artists as Richard Leacock, Shirley Clarke, Norman Mailer, and Jean-Luc Godard, Pennebaker has continually reworked and redefined the forms of documentary filmmaking. This book also includes a recent interview with the director and a full filmography.
AUTHOR BIOGRAPHY
Keith Beattie is a member of the Faculty of Arts and Education at Deakin University, Melbourne, and the author of Documentary Screens: Non-Fiction Film and Television; Documentary Display: Re-Viewing Nonfiction Film and Video; and Humphrey Jennings, among other books.
REVIEWS

"A welcome addition to the Contemporary Film Directors Series."--Documentary


"Filled with useful historical and technical details, this enthusiastic study of one of documentary cinema's most important filmmakers will convert some skeptics and create many new admirers of D.A. Pennebaker's work."


"Enlightening. . . . A useful look at the work of an affable, masterful documentary filmmaker who somehow managed to be in the midst of some of the major cultural turning points of the twentieth centrury."-- Journal of Film and Video