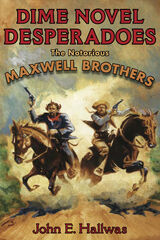 A thrilling true crime narrative and groundbreaking historical account, Dime Novel Desperadoes recovers the long-forgotten story of Ed and Lon Maxwell, the outlaw brothers from Illinois who once rivaled Jesse and Frank James in national notoriety. Growing up hard as the sons of a struggling tenant farmer, the Maxwell brothers started their lawbreaking as robbers and horse thieves in the 1870s, embarking on a life of crime that quickly captured the public eye.

Already made famous locally by newspapers that wanted to dramatize crimes and danger for an eager reading audience, the brothers achieved national prominence in 1881 when they shot and killed Charles and Milton Coleman, Wisconsin lawmen who were trying to apprehend them. Public outrage sparked the largest manhunt for outlaws in American history, involving some twenty posses who pursued the desperadoes in Wisconsin, Minnesota, Iowa, Illinois, Missouri, and Nebraska. Some of the pursuers were intent on a lynching, but the outlaws escaped against incredible odds. When a mob finally succeeded in killing Ed, in broad daylight on a courthouse lawn, that event generated widespread commentary on law and order. Nevertheless, the daring desperadoes were eventually portrayed as heroes in sensationalistic dime novels.

A stunning saga of robbery and horse stealing, gunfights and manhunts, murder and mob violence, Dime Novel Desperadoes also delves into the cultural and psychological factors that produced lawbreakers and created a crime wave in the post-Civil War era. By pointing to social inequities, media distortions, and justice system failures, John E. Hallwas reveals the complicity of nineteenth-century culture in the creation of violent criminals. Further, by featuring astute, thought-provoking analysis of the lawbreaker's mindset, this book explores the issue at the heart of humanity's quest for justice: the perpetrator's responsibility for his criminal acts.

Every overview and encyclopedia of American outlaws will need to be revised, and the fabled "Wild West" will have to be extended east of the Mississippi River, in response to this riveting chronicle of major American desperadoes who once thrilled the nation but have since escaped historical attention for well over a century. With more than forty illustrations and several maps that bring to life the exciting world of the Maxwell brothers, Dime Novel Desperadoes is a new classic in the annals of American outlawry.
AUTHOR BIOGRAPHY
John E. Hallwas, Distinguished Professor Emeritus at Western Illinois University, has published widely on Illinois and the Midwest. He has written and edited two dozen books on literature and history, including The Bootlegger: A Story of Small-Town America and Spoon River Anthology: An Annotated Edition.
REVIEWS
Received the Society of Midland Authors Award in the category of Biography, 2009. Received a Superior Achievement Award from the Illinois State Historical Society, 2009.
— Society of Midland Authors Award