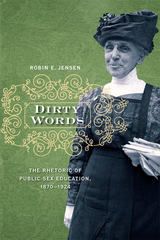 Dirty Words: The Rhetoric of Public Sex Education, 1870-1924, details the approaches and outcomes of sex-education initiatives in the Progressive Era. In analyzing the rhetorical strategies of sex education advocates, Robin E. Jensen engages with rich sources such as lectures, books, movies, and posters that were often shaped by female health advocates and instructors. She offers a revised narrative that demonstrates how women were both leaders and innovators in early U.S. sex-education movements, striving to provide education to underserved populations of women, minorities, and the working class. Investigating the communicative and rhetorical practices surrounding the emergence of public sex education in the United States, Jensen shows how women in particular struggled for a platform to create and circulate arguments concerning this controversial issue.