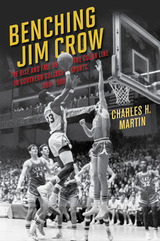 Chronicling the uneven rise and slow decline of segregation in American college athletics, Charles H. Martin shows how southern colleges imposed their policies of racial exclusion on surprisingly compliant northern teams and explains the social forces that eventually forced these southern schools to accept integrated competition. Martin emphasizes not just the racism prevalent in football and basketball in the South, but the effects of this discrimination for colleges and universities all over the country. Southern teams such as the University of Alabama, University of Mississippi, and the University of North Carolina were obsessed with national recognition, but their Jim Crow policies prevented them for many years from playing against racially mixed teams from other parts of the country.

Devoting special attention to the Southeastern Conference, the Atlantic Coast Conference, and teams in Texas, Martin explores the changing social attitudes and culture of competition that turned the tide and allowed for the recruitment of black players and hiring of black coaches. He takes a close look at the case of Texas Western College (now the University of Texas at El Paso), the first major white university in an ex-Confederate state to recruit African American athletes extensively. Martin skillfully weaves existing arguments and documentation on the integration of college sports with wide-ranging, original research, including previously unpublished papers and correspondence of college administrators and athletic directors uncovered in university archives.
AUTHOR BIOGRAPHY
Charles H. Martin is an associate professor of history at the University of Texas at El Paso and the author of The Angelo Herndon Case and Southern Justice.
REVIEWS
A Choice Outstanding Academic Title, 2012.
— Choice