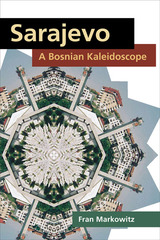 This fascinating urban anthropological analysis of Sarajevo and its cultural complexities examines contemporary issues of social divisiveness, pluralism, and intergroup dynamics in the context of national identity and state formation. Rather than seeing Bosnia-Herzegovina as a volatile postsocialist society, the book presents its capital city as a vibrant yet wounded center of multicultural diversity, where citizens live in mutual recognition of difference while asserting a lifestyle that transcends boundaries of ethnicity and religion. It further illuminates how Sarajevans negotiate group identity in the tumultuous context of history, authoritarian rule, and interactions with the built environment and one another.

As she navigates the city, Fran Markowitz shares narratives of local citizenry played out against the larger dramas of nation and state building. She shows how Sarajevans' national identities have been forged in the crucible of power, culture, language, and politics. Sarajevo: A Bosnian Kaleidoscope acknowledges this Central European city's dramatic survival from the ravages of civil war as it advances into the present-day global arena.

Fran Markowitz is a professor of cultural anthropology at Ben-Gurion University of the Negev in Israel and the author of Coming of Age in Post-Soviet Russia and A Community in Spite of Itself: Soviet Jewish Émigrés in New York.

REVIEWS
"Markowitz dispels widely held myths that Sarajevo has become a purely Muslim city. . . . The author's many insights into Sarajevo and its kaleidoscope of inhabitants are welcome and valuable."Slavic Review


"A warm and well-written portrait of Sarajevo during its first post-war decade."--Journal of the Royal Anthropological institute


"Markowitz has succeeded in combining a solid work of scholarship with a personal take on her subject which she explores in a very thorough and balanced way.  This is a rich contribution to the scholarship on the issue of identify in present-day Bosnia & Hercegovina and deserves a wide audience, appealing to both the academic and general reader."--Europe-Asia Studies