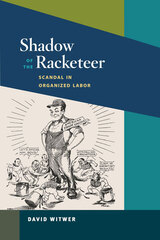 Shadow of the Racketeer: Scandal in Organized Labor tells the story of organized crime's move into labor racketeering in the 1930s, focusing on a union corruption scandal involving payments from the largest Hollywood movie studios to the Chicago mob to ensure a pliant labor supply for their industry. The book details the work of crusading journalist Westbrook Pegler, whose scorching investigative work dramatically exposed the mob connections of top labor leaders George Scalise and William Bioff and garnered Pegler a Pulitzer Prize for reporting.

From a behind-the-scenes perspective, David Witwer describes how Pegler and his publisher, the politically powerful Roy W. Howard, shaped the news coverage of this scandal in ways that obscured the corrupt ties between employers and the mob while emphasizing the perceived menace of union leaders empowered by New Deal legislation that had legitimized organized labor. Pegler, Howard, and the rest of the mainstream press pointedly ignored evidence of the active role that business leaders took in the corruption, which badly tarnished the newly reborn labor movement.

Because he was more concerned with pursuing political gains for the conservative movement, Pegler's investigative journalism did little to reform union governance or organized crime's influence on labor unions. The union corruption scandal only undercut the labor movement. Pegler's continuing campaign against labor corruption framed the issue in ways that set the stage for postwar political defeats, culminating with the 1947 Taft-Hartley Act, which greatly limited the power of labor unions in the United States.

Demonstrating clearly and convincingly how journalism is wielded as a political weapon, Witwer studies a broad range of forces at play in the labor union scandal and its impact, including the influence of the press, organized crime, political corruption, and businessmen following their own economic imperatives.

AUTHOR BIOGRAPHY
David Witwer is an associate professor of history at Penn State Harrisburg and the author of Corruption and Reform in the Teamsters Union.
REVIEWS
Winner of Labor History's Prize for the best book on labor history, 2010.
— Labor's History