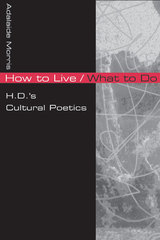 The writing of H.D. is so linguistically rich and multilayered in structure that it has had almost as many interpretations as it has interpreters, from Freudians to feminists, from classicists to postmodernists. In How to Live/What to Do, however, Adalaide Morris removes the work of this iconic poet, dramatist, and novelist from compartments into which it has historically been placed. As she examines the "ongoingness" of H.D.'s writing, Morris makes an eloquent and compelling case for a consideration of poems--all poems--as forms of cultural mediation, instructive historical documents that engage the reader in wide-ranging contemporary debates and use their acoustical richness to generate tangible cultural effects.

Ever since the publication of her first H.D. essay in 1985 (included here in an expanded version), Morris has eschewed prevailing literary trends in favor of new approaches that both challenge and overpass dominant critical constructs. As she argues in this volume, the writing and, crucially, the reading of poetry is a process in which meaning is produced by the interplay of words on a page and in the ear of the reader. This quality of being not heard but overheard, composed within the body, is crucial to an appreciation of H.D.

Morris shows H.D. to be a playful linguistic innovator whose writings bear on debates in science, technology, and cinema as well as on poetry. Foremost, however, H.D. was a profound reshaper of the boundaries and possibilities of poetry, a generative form that, as this book shows, can indeed serve the cultural work of survival and resistance against the violence of modern culture.

AUTHOR BIOGRAPHY
Adalaide Morris is John C. Gerber Professor of English at the University of Iowa and, most recently, the coeditor of New Media Poetics: Contexts, Technotexts, and Theories.
REVIEWS
"Simply superb. Morris's style is almost as great a pleasure as the impact of her ideas. It is amazing how much she can bring into imaginative and intellectual play, holding and complicating one layer of thought with another, and building to a remarkable sense of intellectual density and expansiveness."--Eileen Gregory, author of H.D. and Hellinism: Classic Lines