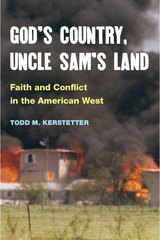 While many studies of religion in the West have focused on the region's diversity, freedom, and individualism, Todd M. Kerstetter brings together the three most glaring exceptions to those rules to explore the boundaries of tolerance as enforced by society and the U.S. government.

God's Country, Uncle Sam's Land analyzes Mormon history from the Utah Expedition and Mountain Meadows Massacre of 1857 through subsequent decades of federal legislative and judicial actions aimed at ending polygamy and limiting church power. It also focuses on the Lakota Ghost Dancers and the Wounded Knee Massacre in South Dakota (1890), and the Branch Davidians in Waco, Texas (1993). In sharp contrast to the mythic image of the West as the "Land of the Free," these three tragic episodes reveal the West as a cultural battleground--in the words of one reporter, "a collision of guns, God, and government." Asking important questions about what happens when groups with a deep trust in their differing inner truths meet, Kerstetter exposes the religious motivations behind government policies that worked to alter Mormonism and extinguish Native American beliefs.

AUTHOR BIOGRAPHY
Todd M. Kerstetter is an associate professor of history at Texas Christian University, Fort Worth.
REVIEWS
"Kerstetter's well-written study unpacks how devastating the conflict becomes when mythic worlds--in this case those of region and religion--collide."--Great Plains Quarterly


"An important contribution to our understanding both of the role of religion in the development of the American West and of the interplay of government and social geography in shaping religion."--Journal of American History


"Kerstetter has selected a trio of events that not only invite comparison but also stimulate critical questioning. . . . [A] well-balanced and exemplary book."--American Historical Review